Here is a drawing of the layout of the school across both sites.

In the early years of our reunions at Clarence House (c.2000), old boy Barry Jones was on the staff of Age Concern (now Age UK) and he was on hand at the reunions to give impromptu tours of the building. He was able to point out how the building had changed since its use as our school. Barry was also influential in preserving some important features of the original building - but sadly was not able to save the climbing ropes in the gym (which is now the restaurant) - so the much anticipated game of pirates had to be abandoned!
﻿
We received the following email:

Here are  photos I took when I was French assistant at CBS in 50-51(these gentlemen kindly accepted to stop sweeping the floor of the assembly-hall for three long seconds!).In spite of the poor quality of the photo (on Facebook - ed) donated by Mr. Merilion(staff only sept 50),I feel  pretty sure n°7 IS indeed Mr. Whitbread,one of the friends that made me feel at home in Leicester;so the question-mark is perhaps not justified.Congratulations for creating such a well-organized website. 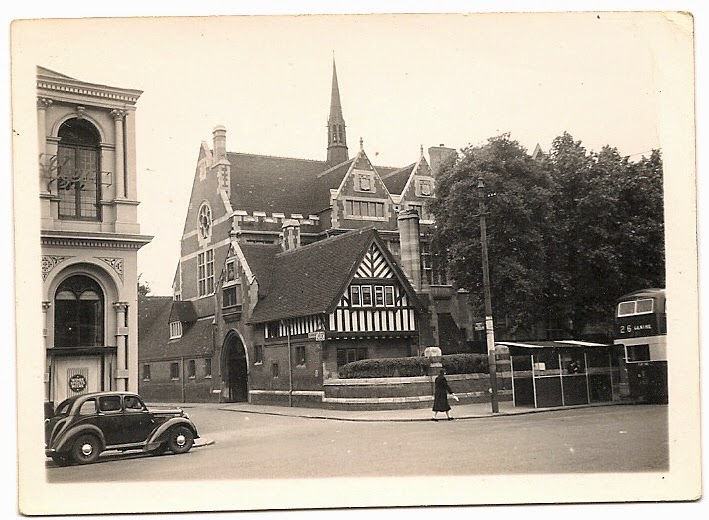 Some interesting details about the vehicles in the picture above:
The car (supplied by our founder Dennis Duggan):

"The car in the (second) photo is a Morris 10 Series M, first produced just before the war. After the war the car manufacturers simply began to produce their pre-war models again until newer ones were designed. From 1955-64 our fa...mily car was a Morris 10 Series M, they are very rare now and I have only seen two since, despite attending numerous car shows. One is (or was) in Coventry Motor Museum."

The bus (supplied by ex-pupil Chris Jinks - a member of the Leicester Transport Heritage Trust www.ltht.org.uk):-

"The bus in question is without doubt a Leyland Titan PD2/1 with a Leyland body - one of 64 such vehicles which was introduced to Leicester City Transport between May 1949 and December 1950.However, it is the destination display which also interests me. It is clearly showing route number 26 but I cannot make out the destination on the photograph.Before 14 March 1949, route number 26 was allocated to Melbourne Road (both clockwise via Humberstone Road and anti-clockwise via London Road ) and also to Knighton Lane.After this date, both Melbourne Road circulars were renumbered 36 although they were still cross-city linked to the 26 Knighton Lane.In the circumstances, I can only think that the conductor forgot to change the destination when he reached the Knighton Lane terminus and has left the display as 26 Knighton Lane whilst now waiting at the 36 Melbourne Road (clockwise) central stop. Can you tell from the original photo whether the display reads Knighton Lane, I wonder ? Incidentally, the 26 Knighton Lane central stop was in Horsefair Street."